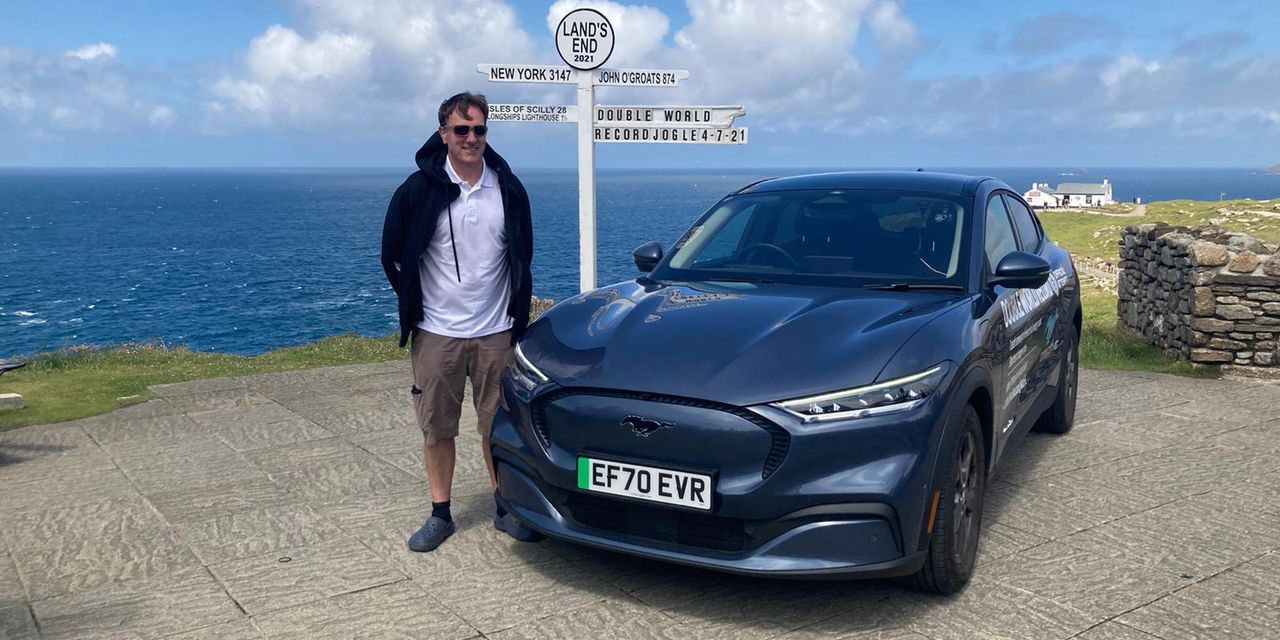 The Ford Mustang Mach-E electric car can hit 60 miles an hour from a standstill in 3.5 seconds. Fergal McGrath prefers to keep the needle stuck at a grandfatherly 40 mph. He’s after a different kind of bragging rights.

Mr. McGrath is a hypermiler, someone who tries to coax as much mileage as possible from their fuel, whether gas or electric. The practice requires driving at a plodding pace to conserve energy, around 40 to 50 mph on a gas-powered vehicle. The efficiency sweet spot on an electric car can be agonizingly slow—sometimes below 30 mph.

Road rage from other travelers comes with the territory, as Mr. McGrath saw when he and fellow hypermiler Kevin Booker set a Guinness World Record in July for lowest energy consumption traveling the length of Great Britain. They were able to squeeze 6.45 miles per kilowatt-hour from a Mach-E on their 27-hour, 840-mile trek, driving at an average 40 mph.

“We had some honks and angry people behind us,” said Mr. McGrath, an engineer for an automotive testing and certification company who lives in Swindon, England.

Hypermiling has been done for years with gas- and diesel-powered cars. The expanding EV market offers new opportunities to test the limits of efficiency. It’s also a tactic to dispel range anxiety: the fear of running out of power, far from a charging station.

Car companies have enlisted some of the world’s foremost hypermilers for promotional road trips to plug the message that EVs won’t leave drivers stranded with drained batteries. Range anxiety is one of the top factors deterring potential buyers, according to consumer surveys. Many of the latest electrics have ranges of 250 to 300 miles. Some hypermilers have eked out twice that.

In August, Wayne Gerdes took a trek through Southern California in a Toyota Mirai hydrogen fuel cell car, which runs on electric power generated by on-board hydrogen, in pursuit of an efficiency record. The trip was sponsored by

Mr. Gerdes, who lives in Carlsbad, Calif., and was credited by Oxford English Dictionary in 2008 with coining the term hypermiling, has done dozens of high-profile drives. This time he found himself trying to manipulate stop-and-go traffic on Los Angeles’s infamously congested Interstate 405. The trick was avoiding complete stops, an efficiency killer.

Whenever Mr. Gerdes saw a backup ahead, he would slow to a crawl, cars stacking up behind him, to try to avoid coming to a full stop. “I’ll intentionally slow down the four or five cars behind me so that we all maintain momentum,” he said. “They don’t understand what’s going on.”

He racked up some peeved drivers but also a Guinness record for the two-day, 845-mile journey, for longest distance by a hydrogen fuel cell car without refueling.

In September, retired Swiss pilot and hypermiler Felix Egolf set off on a trip through the Alps in a

ID.3 electric car. Sponsored by Volkswagen AG, the goal was to showcase one intricacy of EV driving: Electric cars can add energy back to the battery pack when going downhill, a process known as regeneration.

Mr. Egolf said he drove gingerly up mountain passes, trying to conserve juice while yielding to hard-charging trucks and other impatient drivers. His pace quickened on downhills, he said, and he gently tapped on the brakes as he coasted—a move that can maximize regeneration, turning the kinetic energy from friction into electricity. That helped claw back about one-third of the energy he lost on the way up, he said.

“You’re constantly trying to get as much current back into your battery as you can,” he said. “It’s like you’re a hungry grizzly always on the search of food.”

In June, a team of eight drivers took turns wending their way around Thruxton Motorsport Centre, one of the fastest racetracks in Britain, in an electric Renault Zoe over more than 24 hours. Average speed: 19 mph.

The team determined the optimal speed on a slight descent along the course was 24 mph, set on cruise control, said James Cameron, chief executive of Mission Motorsport, a U.K. charity that connects veterans with auto-related jobs and organized the drive. The drivers covered 475.4 miles on a single charge, nearly double the Zoe’s official range, battling tedium.

“These are massive petrol heads. And here we set them off to drive around this incredibly long loop at 19 mph—and they’re not even allowed to turn on the radio” to save electrons, he said. “I mean, it sounds absolutely horrendous.”

In 2018, Sean Mitchell and a companion spent 32 hours in a Tesla Model 3 circling a 1-mile loop of public roadways dotted with chain restaurants and hotels near Denver’s airport. Puttering along at 25 mph, a highlight included receiving burritos from friends via a fishing net hung out the Tesla’s window, to avoid stopping, Mr. Mitchell said.

The result: 606.2 miles on a single charge, compared with the car’s normal 350-mile range. “We were interested in doing something nobody had ever done before, while also raising awareness about electric cars,” Mr. Mitchell said.

Some people find themselves hypermiling not to set records, but to survive.

Last year, Phil Smith, a nurse who lives in North Queensland, Australia, drove his Tesla Model 3 on a four-month journey around the country. One night, in the Western Australia outback, the high-voltage outlet he had planned to use was broken. He eked out a bit of charge from a lower-voltage socket and carried on.

As his Model 3 crawled to the next town, the car’s computer warned him that he would have only 2% battery life left at his destination. “Watching that screen, it’s like a trauma,” he said. “Am I going to get through this?” He did, relieved, with 4% left.

He later chatted with one EV owner who told Mr. Smith that he never lets his battery go below 40%.

Write to Mike Colias at Mike.Colias@wsj.com

Tech Giants Want to Own Your Summer Vacation