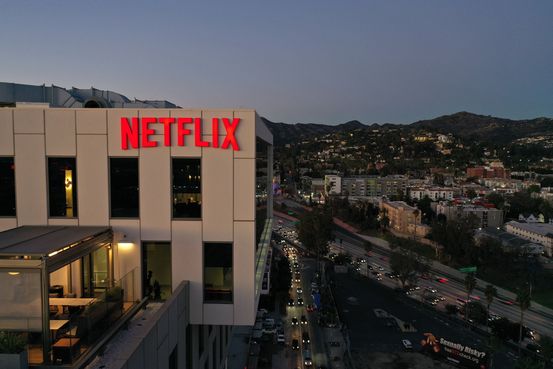 and other streamers dragged the Nasdaq Composite Index deeper into correction territory Friday, as a selloff in government bonds and lackluster earnings have eroded demand for the once-highflying tech trade.

The technology-heavy index was down 2% Friday after oscillating around the flatline earlier in the session. The losses extended the Nasdaq’s fall from its Nov. 19 record to 13%. Treasury yields remained high despite a break in the selling on Friday, leaving the 10-year U.S. Treasury bond at 1.755%, up about 26 basis points so far this month.

Netflix shares were recently off 23% after the company late Thursday reported slowing subscriber growth. The stock was on pace for its biggest drop since 2012. Other streamers followed, as investors sized up their growth prospects in the face of Netflix’s news.

retreated 7.1%. Even those outside of the Nasdaq fell, with

Streamers and other tech stocks had already been falling prior to Netflix’s report, and investors say the pullback likely has yet to reach a bottom. The Nasdaq entered into a correction—defined as a drop of 10% or more from a closing high—on Wednesday.

“Monetary policy is no longer skewed in one direction: to ease. It’s just the opposite,” said Michael Rosen, managing partner at Angeles Investments. “We’re facing an enormous change of monetary policy we haven’t seen in a very long time.”

Although clients of his aren’t panicking, he has raised cash levels by selling stocks in recent weeks, Mr. Rosen added.

Thursday looked like it might deliver a reprieve for the group after the Nasdaq rose more than 1% in morning trading. However, it ended down 1.3%, marking the first time in more than 20 years that it erased an intraday gain of more than 1% and closed off more than 1% on back-to-back days, according to research firm Bespoke Investment Group.

The Nasdaq had been on the verge of a correction over the past two weeks, as the rapid run-up in bond yields and concerns about how quickly the Fed would tighten monetary policy to combat inflation eroded investors’ longstanding devotion to the tech trade.

About 71% of the stocks that trade in the Nasdaq are down at least 20% from their recent highs, a level that’s considered bear territory. More than half are down 40% or more.

Much of the selling has centered around unprofitable tech and other so-called stay-at-home stocks, many of which saw big gains during the first year of the Covid-19 pandemic. As the market confronts the prospect of a series of rate increases, along with the fast rise in bond yields, the valuations for those stocks have fallen as analysts and investors factor in the prospect of lower cash flows.

has fallen even further amid slowing sales and a report Thursday, contested by its chief executive officer, that the fitness company was temporarily halting production of its connected-fitness products. Shares are down 78% over the past six months, but were up 15% Friday as investors bought the dip.

Despite the dip-buying in Peloton, analysts and investors said they don’t expect to see a broader sustained rebound yet. The picture on interest rates and how aggressively the Fed will move to contain inflation remains fuzzy, some said.

“We have a preference for cyclical sectors, such as energy,” wrote Mark Haefele, chief investment officer of

global wealth-management arm, in a Friday note to clients. “In technology, we have advised investors to be more selective.”

Investors who have been buying the dip so far have mostly felt more pain.

has been adding to some positions in January, including buying more shares of Roku and telemedicine company

another pandemic favorite that has been beaten down this year. Her fund has fallen 23% so far this month and is trading at levels last seen in July 2020. The ETF fell 4% on Friday.

“This is the most complex time to be an investor,” said

chief executive and chief investment officer at Laffer Tengler Investments. “As always, once the volatility starts, investors pile on.”