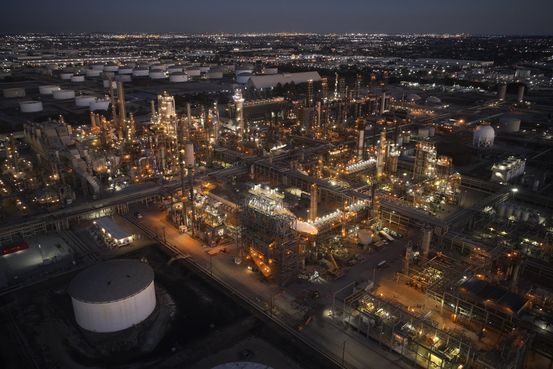 The U.S. and other major oil-consuming nations said Tuesday they would release 60 million barrels of oil from their emergency stockpiles, sending a jolt of new crude supplies into the market amid a price surge caused by the Ukraine crisis.

The move by members of the International Energy Agency, a Paris-based group that includes the U.S., Japan and much of Europe, represents another coordinated effort to counter Russia amid its invasion of Ukraine. The coordinated drawdown is the fourth in the 47-year history of the IEA and is second by size only to the release it executed during the first Gulf War in 1991.

The IEA said it wanted to send “a unified and strong message to global oil markets that there will be no shortfall in supplies as a result of Russia’s invasion of Ukraine.”

“We are prepared to use every tool available to us to limit disruption to global-energy supply as a result of President Putin’s actions,” White House spokeswoman

The IEA said it supported sanctions imposed by the international community on Russia but also worried about tight global oil markets, heightened price volatility and commercial inventories that are at their lowest level since 2014.

The U.S. and other IEA countries are hoping to bring down oil prices, which traded Tuesday above $100 a barrel at eight-year highs. Prices rose after the IEA announcement to almost $106 a barrel, or up 8.1% on the day.

Lower oil prices would reduce revenue for Russia, one of the world’s largest oil producers, and potentially give the U.S. and Europe more room to target Moscow’s energy industry, which has so far been off limits because of the pain energy sanctions would cause in the West.

This will be the second oil-stockpile release in three months. The Biden administration already decided to unleash 50 million barrels of oil from U.S. reserves in November, while China and others also tapped their own inventories. The IEA, which didn’t join the U.S. in the last release because some European countries felt it wasn’t justified, will now oversee the effort.

The IEA said the amounts to be released amounted to 4% of its members’ stockpiles, equivalent to 2 million barrels a day for 30 days.

The decision to release stockpiles comes as the Saudi-led Organization of the Petroleum Exporting Countries and its Russia-led allies are set to decide to maintain a small production increase of 400,000 barrels a day at a virtual meeting Wednesday. The alliance, often called OPEC+, has approved monthly oil-production increases, but they haven’t lowered prices.

After the release was announced, OPEC delegates said it wouldn’t affect their decision to gradually increase production Wednesday. The view from Saudi Arabia is that the oil market is well supplied and that the run-up in prices is due to speculation disconnected from market fundamentals.

In a note Tuesday, Louise Dickson, the senior oil-market analyst at Rystad Energy, said the participating OPEC+ deal members are producing about 800,000 barrels a day below their promised stated target levels, “adding to the shortness in the supply market and further stoking the bullish price environment.”

the chief commodity strategist at Denmark’s Saxo Bank, said the IEA release didn’t force oil prices down because investors are focused on growing threats to Russian oil exports. “Markets are in panic mode because buyers are shunning Russian oil,” he said.

The fallout from the invasion of Ukraine has raised questions about the reliability of Russia as a supplier to oil and gas consumers around the world. Russia is the single biggest gas exporter and a major supplier of crude, refined products and other resources, including to the U.S. Revenue from overseas energy sales is vital to financing the Russian state, including its war machine.

International sanctions so far have spared energy exports. There is also evidence that the conflict is starting to hurt Russia’s oil shipments. Some banks are refusing to finance Russian crude trades due to sanction fears; a number of tankers are stuck or unable to load in the Black Sea, a key oil waterway; and countries such as the U.K., Canada and Malaysia are now banning Russian oil vessels.

Restrictions on Russia’s economy have also escalated faster than many in the energy industry anticipated, hitting, among other targets, the as-yet unused Nord Stream 2 gas pipeline connecting Russia to Germany.

Write to Benoit Faucon at benoit.faucon@wsj.com and Summer Said at summer.said@wsj.com